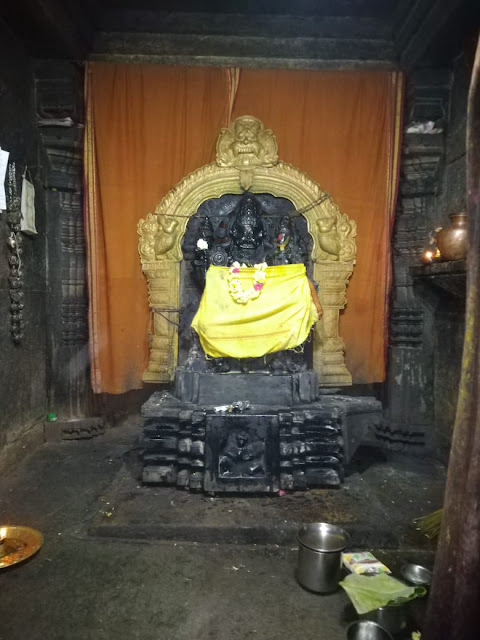 There are three sanctums, the temple being a TRIKOOTA ( ತ್ರಿಕೂಟ ).The South Cell has on a GARUDA PEETHA ( ಗರುಡ ಪೀಠ ) a beautiful image of VENUGOPALA ( ವೇಣುಗೋಪಾಲ ). The North Cell houses on a GARUDA PEETHA a LAKSHMEENARASIMH A ( ಲಕ್ಷ್ಮೀನರಸಿಂಹ ), seated in SUKHAASANA. The Central Cell facing east has an image of KESHAVA ( ಕೇಶವ ) ( S-C-G-P ) also on a GARUDA PEETHA. The image is about 4'6" in height. On the TORANA ( ತೋರಣ ) of each of the three images is carved the DASHAAVATAARAS ( ದಶಾವತಾರಗಳು ). A photo of each of the images in the sanctums is reproduced below. Lakshminarasimha in the Northern Cell Venugopala in the Southern Cell Keshava in the Central Cell
1 comment
Read more

The Interior of the Temple under Study ( Other than the sanctums ) 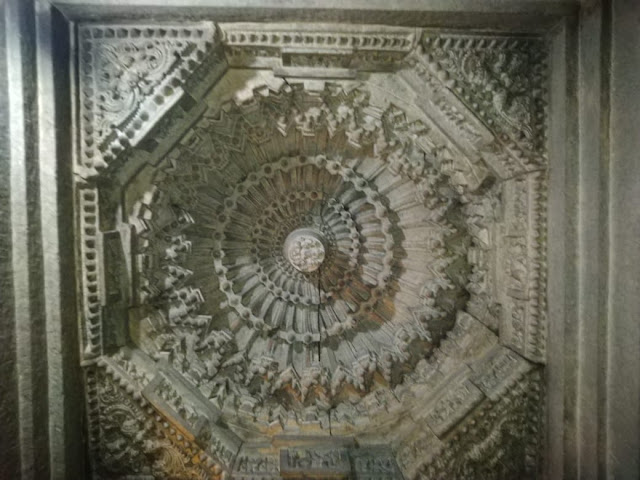 Only the central Cell housing KESHAVA has a SHUKANAASI ( ಶುಕನಾಸಿ ). The three cells have a common NAVARANGA ( ನವರಂಗ ). There are four pillars in the NAVARANGA but they are not very elaborately ornamented as in many other Hoysala temples. An image of GANAPATI and MAHISHAASURAMARDINI ( ಗಣಪತಿ ಮತ್ತು ಮಹಿಷಾಸುರಮರ್ಧಿನಿ ) are found in the western wall but they do not have niches to house them. There are nine beautiful BHUVANESHVARIS in the ceiling. A few photos of the BHUVANESHVARI are seen below.
Post a Comment
Read more

The Interior of a Hoysala temple

- November 18, 2018
The interior of a HOYSALA TEMPLE consists of three parts namely GARBHAGRIHA ( ಗರ್ಭಗೃಹ ), SHUKANAASI ( ಶುಕನಾಸಿ ) and NAVARANGA. 1. GARBHAGRIHA ( the Sanctum sanctorum ) is the most important part of a temple. It is a room in which the image of the deity is stationed in the geometrical centre. 2. Next to the Garbhagriha and contiguous to it is the ARDHA MANTAPA ( ಅರ್ಧಮಂಟಪ ) or SHUKANAASI. It is a narrow pavilion connecting the Garbhagriha with the NAVARANGA. It is  used to keep the articles of worship. Strictly speaking SHUKANAASI is an external ornamental feature over the entrance of the Garbhagriha, which in many cases looks like the beak of a parrot ( hence the name SHUKANAASI ). It sits on the face of the tower as a sort of an ante fix. Usually, it contains an image of the deity to whom the temple is dedicated. The room below the SHUKANAASI is also called by the same name. 3. The NAVARANGA also called MAHAA MANTAPA ( ಮಹಾ ಮಂಟಪ ) or NRITTA MANTAPA ( ನೃತ್ಯ ಮಂಟಪ ) is a
Post a Comment
Read more

The Doorway of the Temple 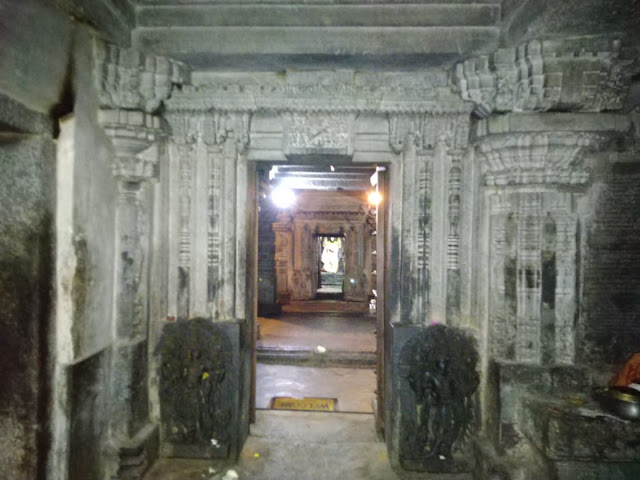 Doorway of the Temple The photo above is the DOORWAY of the temple under study. On the door-jambs may be noticed the DVAARAPAALAKAS who are standing in TRIBHANGA. Note : The appearance, the attributes and stance of the DVAARAPAALAKAS will be in tune with that of the presiding deity. The DVAARAPAALAKAS in a VISHNU TEMPLE are placid looking, modestly dressed and ornamented. They are adorned with the signs and emblems of VISHNU such as a TILAKA on their forehead, and OORDHVAPUNDRA ( ಊರ್ಧ್ವಪುಂಡ್ರ ) on their faces, arms and chest. They carry SHANKHA (conch ), CHAKRA ( discus ), GADAA (mace ) and PAASHAA ( noose ) in their hands. They are scaled in SAPTA TAALA or NAVA TAALA. The DWAARAPAALAKAS of VISHNU or SIVA TEMPLE have recognisable names and specified positions. Four pairs of Dvaarapaalakas guard a VISHNU TEMPLE namely CHANDA and PRACHANDA ( ಚಂಡ ಮತ್ತು ಪ್ರಚಂಡ ), DHAATRU and VIDHAATRU ( ಧಾತೃ ಮತ್ತು ವಿಧಾತೃ ), JAYA and VIJAYA and BHADRA and SUBHADRA. The first named in e
Post a Comment
Read more

The Vimaana of the Temple Under Study 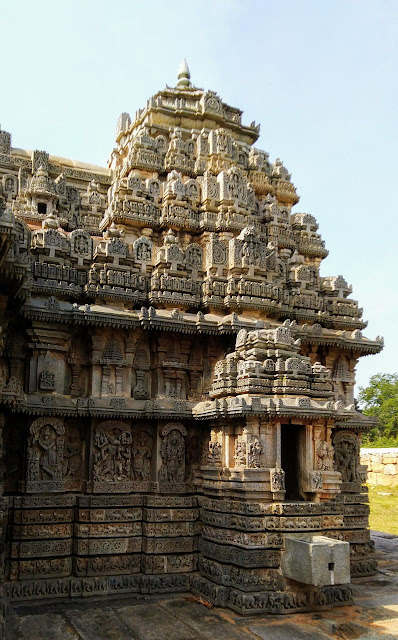 Vimaana of the Lakshminarasimha Temple The main tower, a photo of which is seen above, is composed of three rows of turrets and is surmounted by a stone KALASHA ( ಕಲಶ ). Its face has a KIRTIMUKHA ( ಕೀರ್ತಿಮುಖ ) with GARUDA ( ಗರುಡ ) in the centre ( the attached photo does not show this part ). Below the KIRTIMUKHA is a four- armed YAKSHA. Various forms of VISHNU ( ವಿಷ್ಣು ) have been carved on the other three faces. There are two other towers - one each on the other two sanctums but they are later additions and out of harmony with the main tower.
Post a Comment
Read more

- November 17, 2018
The term VIMAANA has various interpretations. For our purposes it refers to the TOWER or SHIKHARA above the sanctum. The body of a VIMAANA is complex and multi-layered and they rise up in six stages. Each layer is called a VARGA. While the sculptures on the DWAARA GOPURAS could house any subject, the VIMAANA has to be austere and can carry only the prescribed divinities associated with the presiding deity of the temple. The crowning glory of the VIMANA is called KALASHA ( ಕಲಶ ). The KALASHA is not imbedded into the structure by packing it with mortar or cement but placed in position by a hollow rod that juts out of the centre of the tower. There are several symbolisms associated with KALASHA.
Post a Comment
Read more

Identifying the Large Images on the Central Walls - Face 18 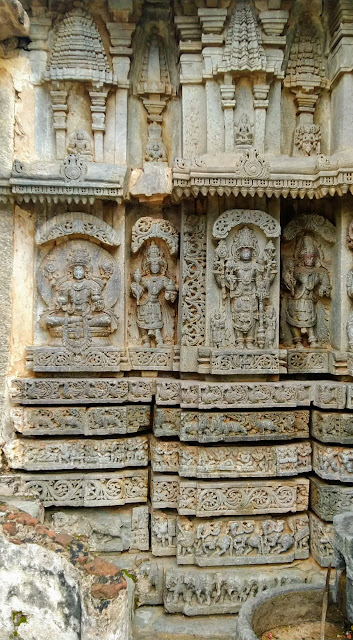 Face 18 The eighteenth Face has has two images the first of which is HARI ( C - P - G - S ), the twenty third CHATURVIMSHATI MURTI. The second image is that of a two-handed VISHNU ( ವಿಷ್ಣು ) seated in PADMAASANA holding a bowl in the right hand and a KALASHA ( ಕಲಶ ) in the left. CHAKRA ( ಚಕ್ರ ) in field on the right, SHANKHA ( ಶಂಖ ) on the left, the DASHAAVATAARAS on the TORANA ( ತೋರಣ ) and GARUDA on the pedestal may also be noticed. There is a Kannada inscription which reads ; MALLITAMMA ( the photo does not clearly show it ).
Post a Comment
Read more
More posts

Putty Prapancha
The blog is authored by R. SRINIVASA PUTTY, Mysuru (former Dean, Department of Studies in Commerce, Tumkur University), who is deeply interested in Classical Arts and Temple Architecture.